Just added to your cart

SAVE 10% on All Orders. Use Coupon Code TY10OFF. Offer Expires Soon!


The whole point of foosball is to put a ball in the opponent’s goal and prevent your opponent from sinking the ball in your goal. Each end of the table features a total of four rods, each of which will control a line of players that you’ll manipulate by turning, pulling, and pushing the rods. While the game sounds simple enough, learning some foosball tips and tricks can help give you an edge over the competition. When you play foosball, you need to be on point, since this is a very fast-paced game and one that requires you pay close attention to the ball’s progression as you move from rod to rod to defend your goal.

Whether you’re a beginner, an intermediate player, or you consider yourself a pro, the tips in this guide will definitely give you an advantage come game time.

A beginner will often struggle to control the rods and keep track of the ball, while they attempt to manipulate the players. They also often make the mistake of gripping the handles of the foosball rods too hard. Keeping a loose grip allows you to move faster, with more precision, without limiting your resistance or slowing you down. If you’re holding the handle correctly, there should be a small gap between the skin that connects the index finger and thumb around the handle.

If your skin is tightly wrapped around the handle, then you’re gripping the rod too tightly. When your shooting, you also need to focus on wrist action. If you only turn your wrist a quarter of a turn, this will provide plenty of speed for your shot. This will cause the rod to spin at one hundred and eighty degrees. You should also try shooting open-handed. This involves rolling the rod on your wrist to boost your shot speed.

As a beginner, you’re probably not very familiar with all of the foosball rules. So, you’ll be happy to learn that it’s totally legal to serve yourself the ball on the drop. For this trick, you need to learn how to spin the ball on the drop and send it to your men on the five bar, also referred to as the midfielder rod.

If your rods are feeling tight, you can slide the rubber bumpers to the end of the rod in order to quickly lubricate and clean them, for smoother, faster shot action. When the bumper slides down the rod, it cleans some of the gunk built-up on the rod, instantly removing it. This will result in faster, smoother shooting action. However, if you have a pro-quality foosball table, such as the Best Choice Products 48in Competition Sized Wooden Soccer Foosball Table, then you can apply more silicone to the rod, as opposed to sliding the bumpers down the rod. If you continue to slide the bumpers instead of applying more lubrication, this can quickly wear down the life of the bumper and can cause the rods to flake.

To protect your goal, make sure you move both your defense rods together. Doing so will give you a solid defensive unit. It’s also important to prevent your defensive players from overlapping so you can avoid the players crashing into each other. Instead, space them slightly apart, just enough so that the ball cannot make it past you men. This gap should be very small, and if done correctly it can have a huge impact on your defense. 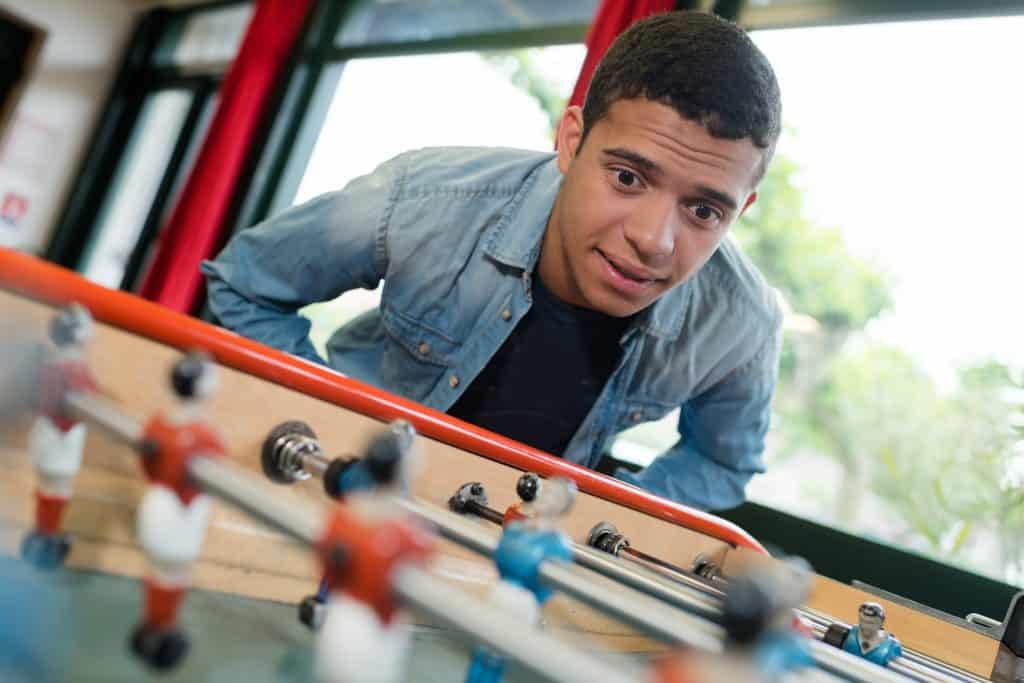 When you play foosball, you’re always playing defense. During this time, make sure you always keep an eye on the ball, wherever it is on the table. Most new players can easily become distracted and won’t realize that many reflected shots can easily be blocked by just continuing to keep an eye on the ball’s progress across the table. If the ball is located on the left side of the table, and you have the ball on offense, then your men should also be on offense. Keep your men moving nonstop in order to keep up your defense.

If you’re playing a game of one on one, use the pinkie finger and thumb on your left hand to play both defensive rods simultaneously. To do this, you’ll need to hold the rod right in front of the handle to get a better grip, but don’t use the actual handle itself. This type of formation will be useful when an opponent is taking shots from the defensive side of the table.

How to Avoid Ricochets

Avoid bounces and ricochets off the defensive tip. By following a few defensive fundamentals you can easily prevent your opponent from making a goal. If you’re using a good foosball table, then you probably have a rod with a three-man goalie set up. For these types of tables, you’ll find that a number of shots tend to hit the two outside men that aren’t in front of the goal. Keep in mind, these men aren’t used to defend shots. If you tilt your men backward, once an obvious shot is going to hit a wall, this helps to avoid any type of accidental bounce from hitting one of your men, causing you to score on yourself. Allow the ball to hit the wall, so you can catch the rogue ball using your two-bar defense rod.

When you play, make sure you focus on switching up your patterns and movements. When you’re playing defense against a better player, learning to alternate your patterns and defensive movements will be important. This will make your defense more unpredictable and will keep your opponent distracted.

Trick shots can come from any type of basic shot, just as long as it comes from an unconventional or unexpected shot. Many people believe that trick shots are very complicated. But in reality, these shots can be taken on both the offensive and defensive sides of the table. These shots are often created by people who specialize in one specific type of shot. If you focus on consistently shooting a shot at a master level, this can allow you to focus on creating variations of the shot, which results in a trick shot. These shots are the most effective when they take place against an opponent when they least expect it, so they won’t have any type to prepare for it.

The serving cup method is one of the easiest defense shots to master. For the first serve, the ball will be served down the middle of the table, with no preference for either side. Once a goal is served, the serving player can try to serve the ball to themselves. If your table is equipped with a serving cup, then there’s a very simple way to do this. Begin by placing the ball on the left top edge of the serving cup. Next, you’ll slowly release the ball, causing it to spiral down the cup, to the right side. Once the ball drops it will roll towards your five-man rod.

If your table doesn’t come with a serving cup then use the back-spin serving method. In order to apply some spin on your serve simply place the thumb on the left side of the ball. Next, you’ll push down on the ball, while you’re pushing it to the right side. If done correctly, the ball will stop short and roll backward toward the five-man rod once it hits the surface.

How to Pin Down the Ball 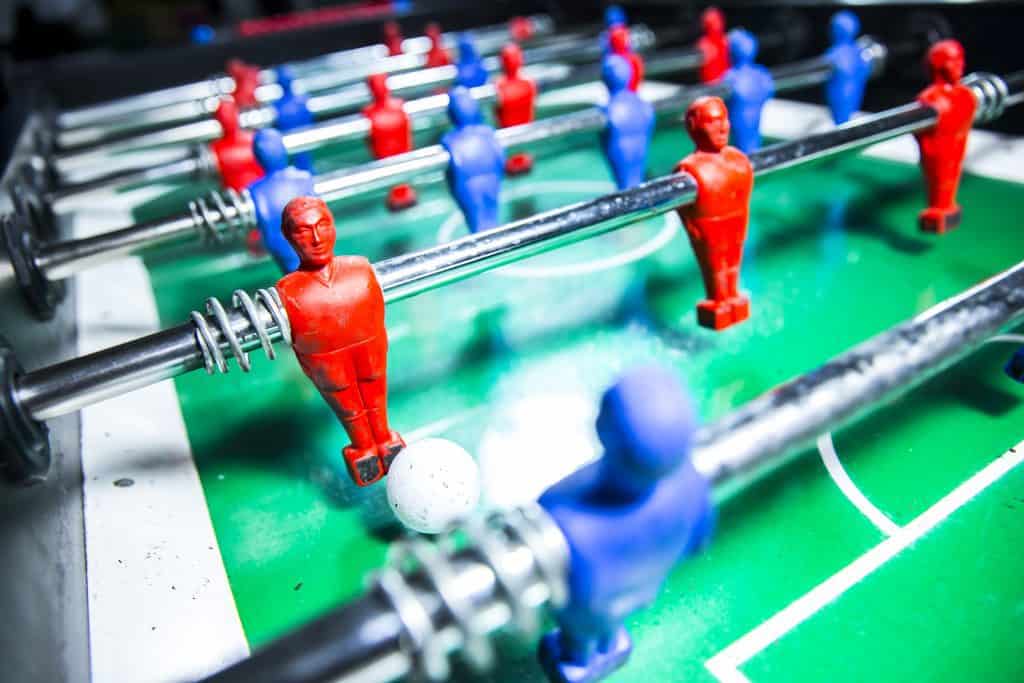 Learning how to pin down the ball will allow you to instantly gain control as you plan your next attack. Once the ball approaches one of your men, just slightly angle him backward. Doing so allows you to trap and catch the ball right under the player. You can do this as a back or front pin, however, this will depend on the direction the ball is coming from. In a pinned position, you can execute a pin shot or a pass.

Stay On Top of the Offense

While you’ll be tempted to focus all of your attention on your own men, do your best to pay attention to your opponent’s men. Doing so allows you to keep an eye on any gaps in their formation. Once you’ve sighted a gap, it will create a path that allows you to advance the ball forward. If you spy a clear path, then go ahead and take your shot.

Your true offense is your three-man rod. Because of this, it’s important that you try to advance the ball towards them in order to gain as much control as possible. If your men are positioned too straight, passes will simply bounce off them and the other player will end up with the ball. If you have them angled forward, the men will be in the perfect position to hold and receive the ball. Try to keep them in this position as much as possible.

Well-executed offense in foosball is all about learning how and when to pass. In order to keep your opponent guessing, you’ll need to learn how to methodically move the ball. This will also put your men in a better position to score. The wall pass is easily one of the most effective passing techniques. It’s also a great way to pass the ball to your three-man rod.

The first step is controlling the ball via the inside edge of the number two five-man rod. Next, you’ll position the three-man rod forward against the wall. Start by sliding the ball to the wall using your five-man rod, then you’ll slip it through to your forward, quickly.

Lane passes are similar to wall passes, however, this pass will prevent the opponent from placing their five-man rod against the wall in an attempt to block. With this move, you’ll slide the ball from the inside edge of the player, while you find a slot before the wall. Place your forward about four inches from the wall in order to receive the pass.

If you want to try out a more advanced move than the wall pass, then I recommend redirecting the ball using a bounce. This will trick your opponent into thinking you plan on passing it using the wall pass move. But instead of the wall pass, you’re simply bouncing the ball back in another direction, back to your number two five-man rod, then you’ll quickly pass the ball to your forward. Like with the lane pass, you should have the ball positioned about four inches from the wall.

Many beginners usually try to slam the ball forward. While taking a shot from the back can work, instead, try to move the ball forward using calculated, short passes. Using a bounce pass, lane pass, or a wall pass are all excellent ways to get the ball moving forward.